According to the Texas Forest Service, since wildfire season began last year, fires have burned almost 3.8 million acres in Texas and destroyed 2,742 homes. 250 of the 254 Texas counties are reporting burn bans: 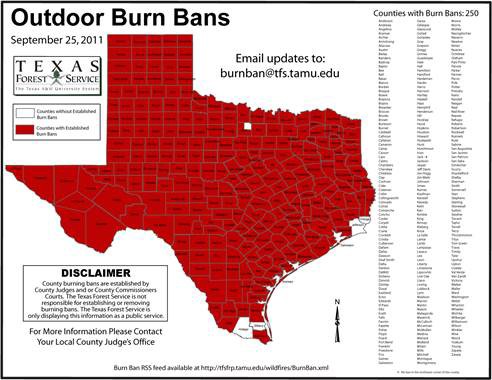 On  September  9th,  the  Federal  Emergency  Management  Agency  (FEMA) issued  a  major  disaster declaration for six Texas counties (Bastrop, Colorado, Houston, Leon, Travis, and Williamson) impacted by wildfires that began in the area on August 30th. Also in September, Gov. Rick Perry renewed his wildfire emergency declaration for the ninth time since it was initially issued on December 21, 2010.

But, on September 23, 2011, TDI released a bulletin denying a petition for determination of catastrophe regarding  the  Texas  Wildfires.  The  bulletin  provided  that  “a  determination  of  a  weather-related catastrophe or major natural disaster for the purpose of claims processing is not warranted at this time. The  above-mentioned  Petition  is  hereby  denied  and  all  claims  resulting  directly  from  the  above- mentioned event shall be processed pursuant to the deadlines provided in Texas Insurance Code, Chapter 542, Subchapter B.” That bulletin can be located at  http://www.tdi.texas.gov/bulletins/2011/cc39.html.

This TDI ruling is significant because CAT teams working the fires in Texas are not governed by the 30- day time deadlines as are most CAT operations in Texas.  Instead, the standard 15-day and 15-business day deadlines apply to fire claims until expressly modified by TDI.  We will continue to track these developments and report on them as they change.